THE HISTORY OF GENEVA MILLS-SINCE 1832

A GATEWAY FROM THE PAST,
1 CREATING A CLEAR PATH TO THE FUTURE…
WOODVILLE/GENEVA-THE BEGINNING

Welcome to our History – Come be a part of it 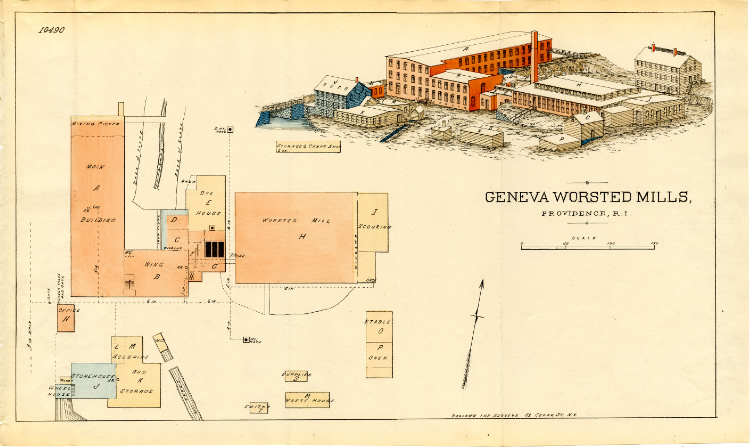 During the 18th Century this area was composed primarily of farms with at least 2 saw mills built along the West River. Early in the nineteenth century, mills began to be established along the Douglas Pike from Twin Rivers to Providence line. In 1814, Wilbur Kelley built a 2 story stone factory and a stone gambrel-roof dwelling to the east of the present Route 7 on a tributary of the West River. A grist mill was established in 1834 below the Wenscott Reservoir and Otis Angell built a stone factory on the West Riverc. 1846, which James Hilton was using as a bleachery by 1868.
The man whom Woodville was named, John B. Wood, built a factory in 1846 at what is now known as the Woodville four corners. He manufactured “coconut dippers”. This mill passed in 1852 to Clark and Gideon, manufacturers of cotton and finally to the Dempsey brothers, who ran a bleaching and dying operation. Before it burned in 1882, it employed one hundred workers and ran on steam power. A mill was also opened at Geneva in 1827 by Edward S. Rhodes and sold to David Heaton and Martin K. Cowing in 1832.

A LOOK AT GENEVA MILLS PROPERTY IN 1919. The view shows Douglas avenue before the mill with the Geneva Pond on the left and Geneva Mills up ahead on the right. On the Providence, North Providence Line. 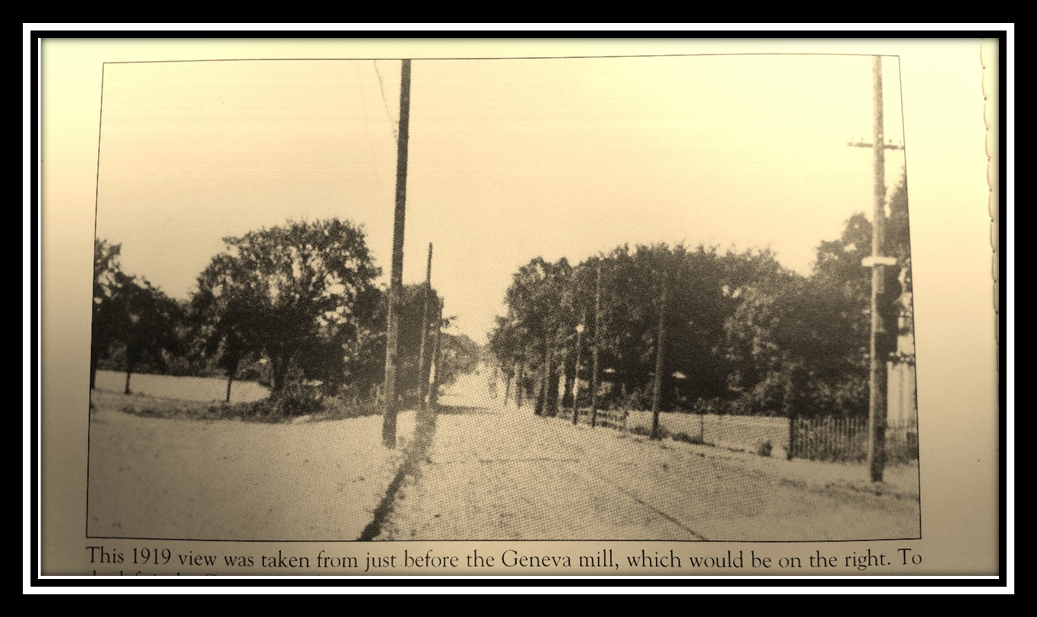 Below is a picture of the Geneva Volunteer Fire Company pictured here in 1927. 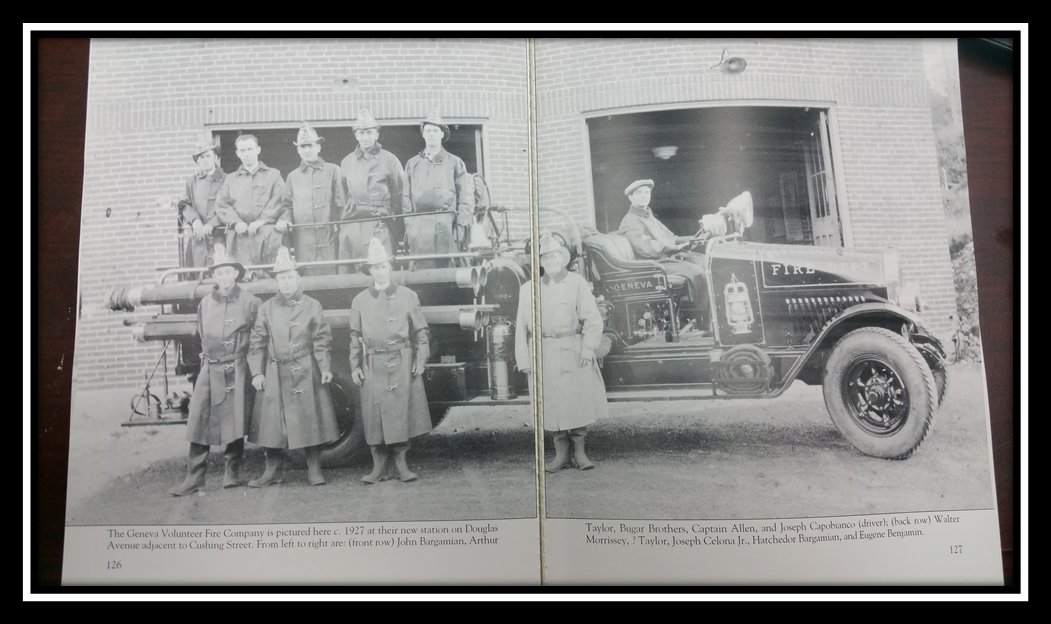 THE HISTORY OF GENEVA WORSTED MILLS BEGINNINGS ARE AS FOLLOWS:

K. Cowing (1807-1891) purchased a mill privilege on the West River in what was then part of North Providence. Although the waterpower of the West River was limited, the site was sufficient for a small manufacturing operation and convenient to transportation routes such as the Douglas Turnpike (laid out in 1807) and the Mineral Spring Turnpike (1826). The two partners immediately erected a small mill and began to manufacture cotton cloth under the name of Heaton & Cowing.

Heaton & Cowing leased space in their mill to other textile companies, including a “coloring, bleaching, and staining works” and a woolen manufacturer and finisher. The firm continued to improve and adapt their water privilege on the West River. They invested in a water company that impounded the West River to create the Wenscott Reservoir, allowing them to store water that supplemented the run of the river during low-water months. In 1853, Heaton & Cowing installed a new raceway to tap the West River upstream at a higher elevation and thus to age 2 of 2 increase the amount of power they generated. In 1860, Heaton & Cowing’s 8 male and 21 female workers produced 150,000 yards of braid valued at $25,000.

In 1862 Heaton & Cowing invested in the construction of the Geneva Mill, a substantial brick industrial plant, comprising a main building with an attached repair shop, dye house, and finishing rooms. The Geneva Mill used waterpower and steam power, while Heaton & Cowing reverted to drawing water from the original river channel and created a new mill pond, later known as Geneva Pond. Heaton & Cowing leased the new mill to various operators for sixteen years and then sold the entire property to the firm of Ullman and Sack (later Geneva Worsted Mills). After a major fire in 1891, the Geneva Mill was rebuilt acquiring much of its present form. By 1891 textile manufacturing had ceased in the ca.1832 mill, which was reused for storage and a carpenter’s shop.

In 1896, the Wanskuck Company, a manufacturer of worsted fabrics, acquired the entire Geneva complex. Over the years, the new owner made a number of improvements to the plant, demolishing some obsolete structures and building the large brick, two-story addition to the old mill between 1926 and 1937. Labor conflict and southern competition forced the Wanskuck Company to close down the plant in 1957.

In 1862 Heaton and Cowing invested in the construction of the Geneva Mill, a substantial brick industrial plant (burned and rebuilt in 1891), comprising a main 100’ by 50’ building with an attached repair shop, dye house, and finishing rooms. The much larger Geneva Mill used the waterpower provided by the ca. 1853 headrace
created for the Heaton & Cowing Mill, as well as steam power. Heaton & Cowing, in turn, reverted to drawing water from the original river channel just west of the factory, where they created a new pond which became known as Geneva Pond. At the same time they added a new single-story wheelhouse addition on the southwest
corner off the stone mill. (See Additional Information Figure 4 and Figure 5) In his 1879 deposition, Martin Cowing was asked about this arrangement:
Q. Now about that pond on the west side of the river there at your place—Geneva. How is that fed?
A. Well, that receives the surplus water that is not received at the brick [Geneva] mill, and also a stream that
enters from the south—what we call the Olney Brook. Where there is a surplus from the regular course that flows
over and runs down into that pond.xxiii

Heaton & Cowing did not operate the Geneva Mill, but leased it to a series of operators who produced cassimere (a type of woolen suiting) between 1863 and 1879.xxiv In the latter year, the Heaton & Cowing Mill Company sold the Geneva Mill and the Heaton & Cowing Mill and to the manufacturing partnership of Ullman and Sack. A. Albert Sack (b. 1842) emigrated in 1866 to the United States from his native Germany, where he had learned the woolen and worsted trades. In the mid-1870s he served as superintendent for Owen and Clark, then lessees of the Geneva Mill. In 1879 Sack, in partnership with S.B. and Morris Ullman, purchased the assets of the
Geneva Mill from the corporation formed twelve years earlier. Sack and the Ullmans incorporated themselves as the Geneva Worsted Mills in 1880.xxv Sack remained with the company until 1884 when he organized the Lymansville Company, overseeing the construction of a new steam- and waterpowered brick plant on the
Woonasquatucket River in North Providence. The 1881 Barlow’s Insurance Survey described the Heaton & Cowing Mill as Geneva’s Mill No. 2. Drawing and twisting operations were carried out on the first floor, spinning on the second. The rear frame addition was used for storage. Although the mill still employed its own waterpower system, the Geneva Worsted Mill, seeking to supplement available waterpower at Mill No. 2, built a frame Engine House attached to the south wall by 18

Additional History – Geneva Mills over the past 40 years has been home to RN Koch, a jewelry manufacturer which employed over 300 employees, and Symmetry Products Group, Foam Technology which until had 150 employees manufacturing foam products and architectural and decorative products for the residential and commercial construction industry. Symmetry Products moved to Lincoln, Rhode Island and the Owner Steven A. Lancia, formed a company Immortal Land Development to further develop the property into beautiful loft living spaces and a supporting community of forward thinking residence. The property is being restored as a gated community private ground lined with vintage street lights, roads and surrounded by streams and trees on the Providence, North Providence line. The historic property is mixed use, and the addition of the Gateway Building, an original structure on the west side of Geneva Mills, it is being developed to provide live work and industrial lofts for thriving artists and entrepreneurs.

THESE INSURANCE DRAWING SHOWS GENEVA WORSTED MILLS AS A COMPLETE STRUCTURE WHERE EMPLOYEES LIVED AROUND AND ON THE MILL PROPERTY. THE FOLLOWING DATES CHANGED LIVES AT GENEVA IN THE LATE 1800 WITH FIRE AND REBUILDING OF THE MILL.GENEVA MILLS DURING THE LATE 1800’s

THIS INSURANCE DRAWING SHOWS GENEVA WORSTED MILLS AS A COMPLETE STRUCTURE WHERE EMPLOYEES LIVED AROUND AND ON THE MILL PROPERTY. THE FOLLOWING DATES CHANGED LIVES AT GENEVA IN THE LATE 1800 WITH FIRE AND REBUILDING OF THE MILL.
Providence, RI Geneva Mill Fire, Jan 3 1891 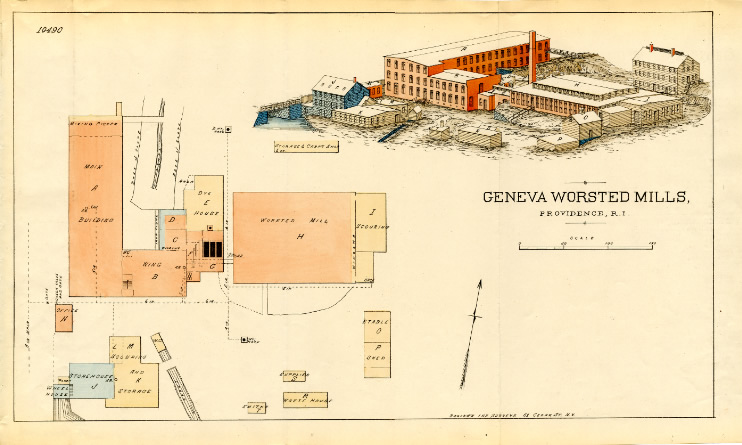 OUR NEIGHBORS AT GENEVA MILLS: TODAY
Our friends occupy the original building in Geneva Worsted Mills, and was declared a Historic Property. Good Neighbors, and a great community. Geneva Mills

2016 Design Award, Rhode Island Monthly
Saccoccio & Associates has completed the historic renovation of the Heaton and Cowing Mill in Providence, creating 20 units of veterans housing.The project was created by the Blackstone Valley Development Corporation (BVDC), the development arm of the Arc of Blackstone Valley. The BVDC utilized federal, state and city programs to reclaim the historic mill and the surrounding area. Saccoccio & Associates converted the abandoned mill into 19 one-bedroom micro apartments and one efficiency unit, ranging from 250 to 400 square feet. Located at 1115 Douglas Avenue near the North Providence line, the complex includes common areas, a community space to be used for education and job training and a landscaped outdoor area along the West River. The original three-story building was built in 1832 and is “a rare example of a small scale early- to mid- 19th century textile factory,” according to the RI Historic Commission. 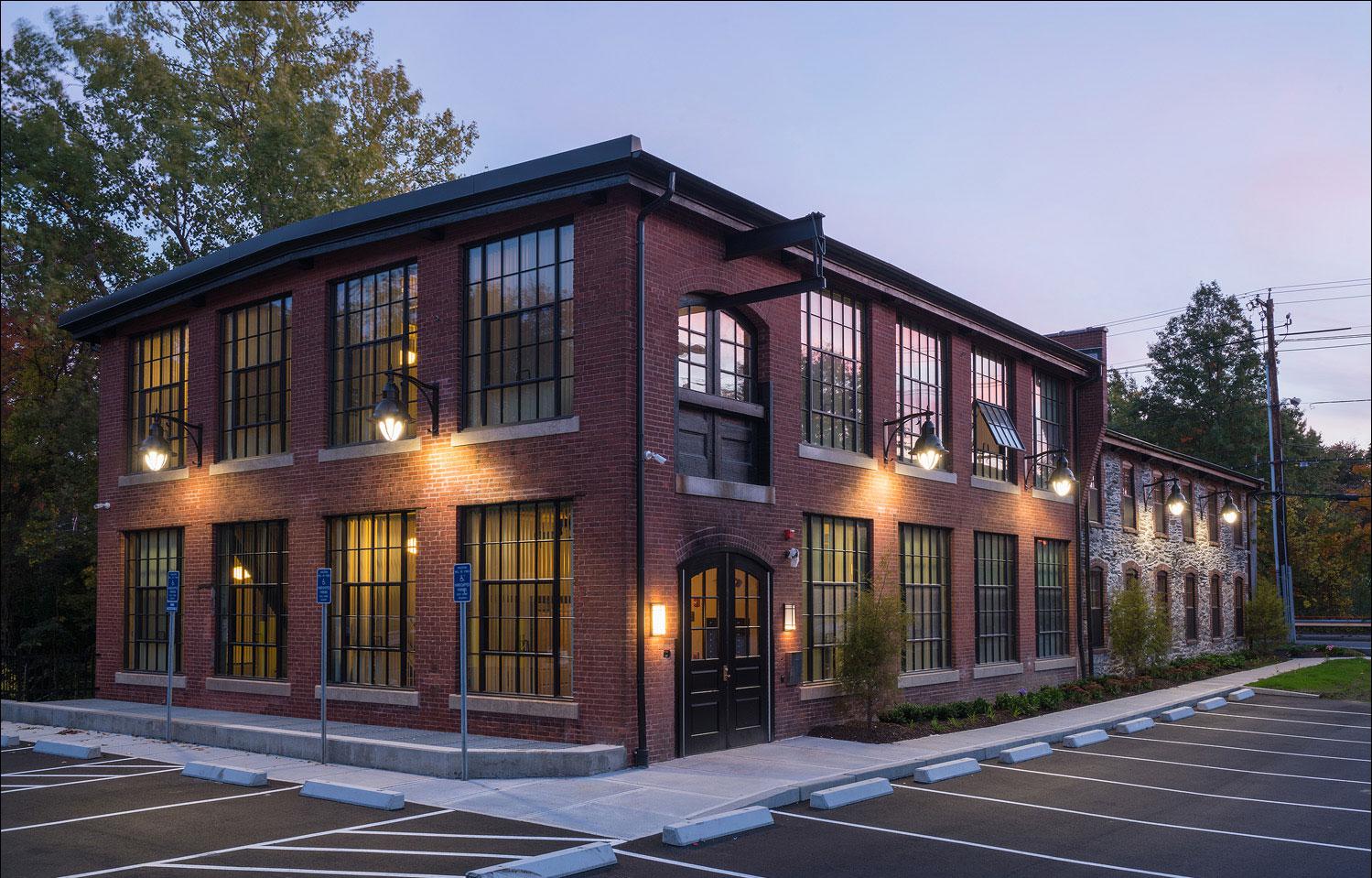 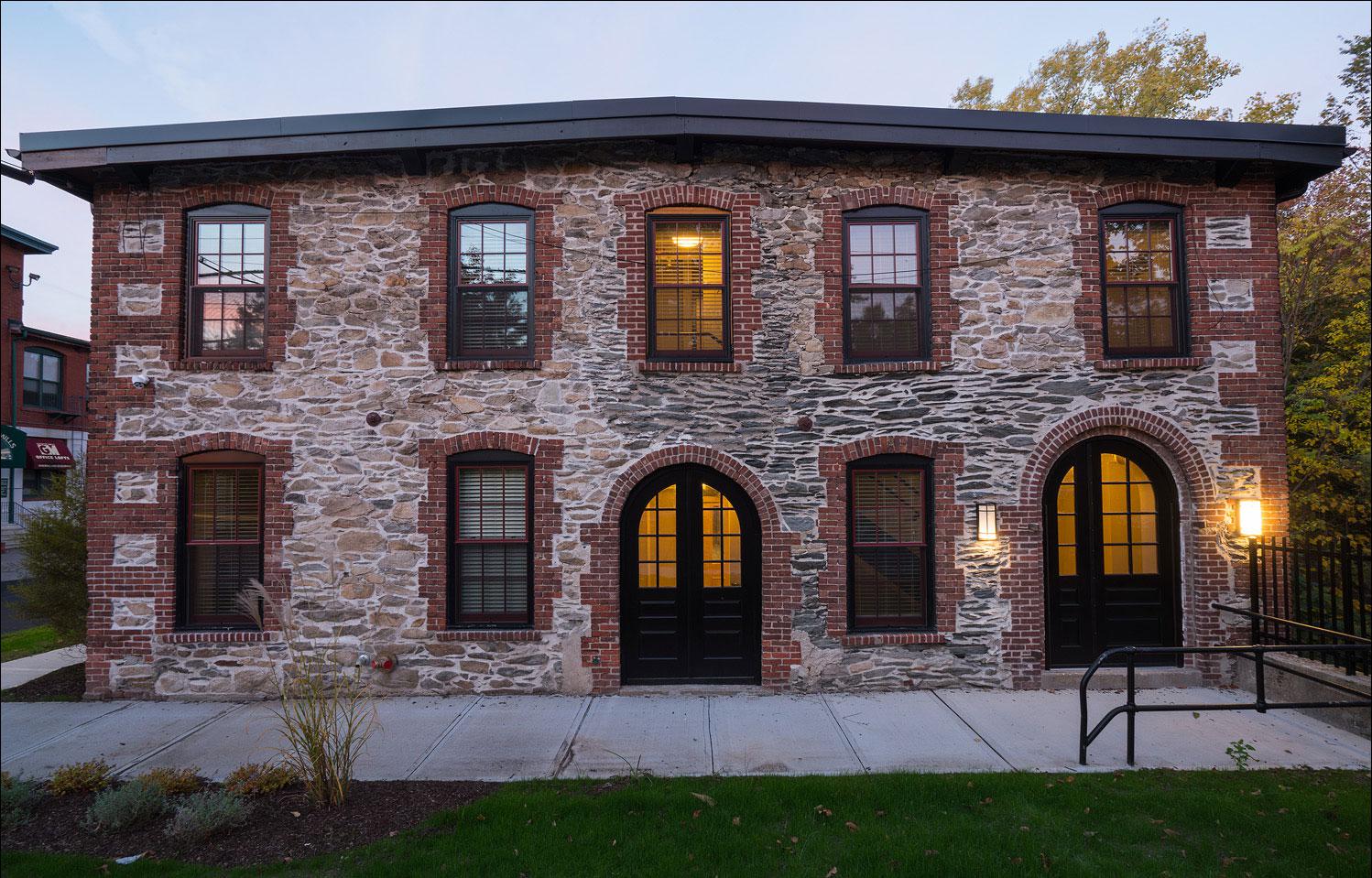 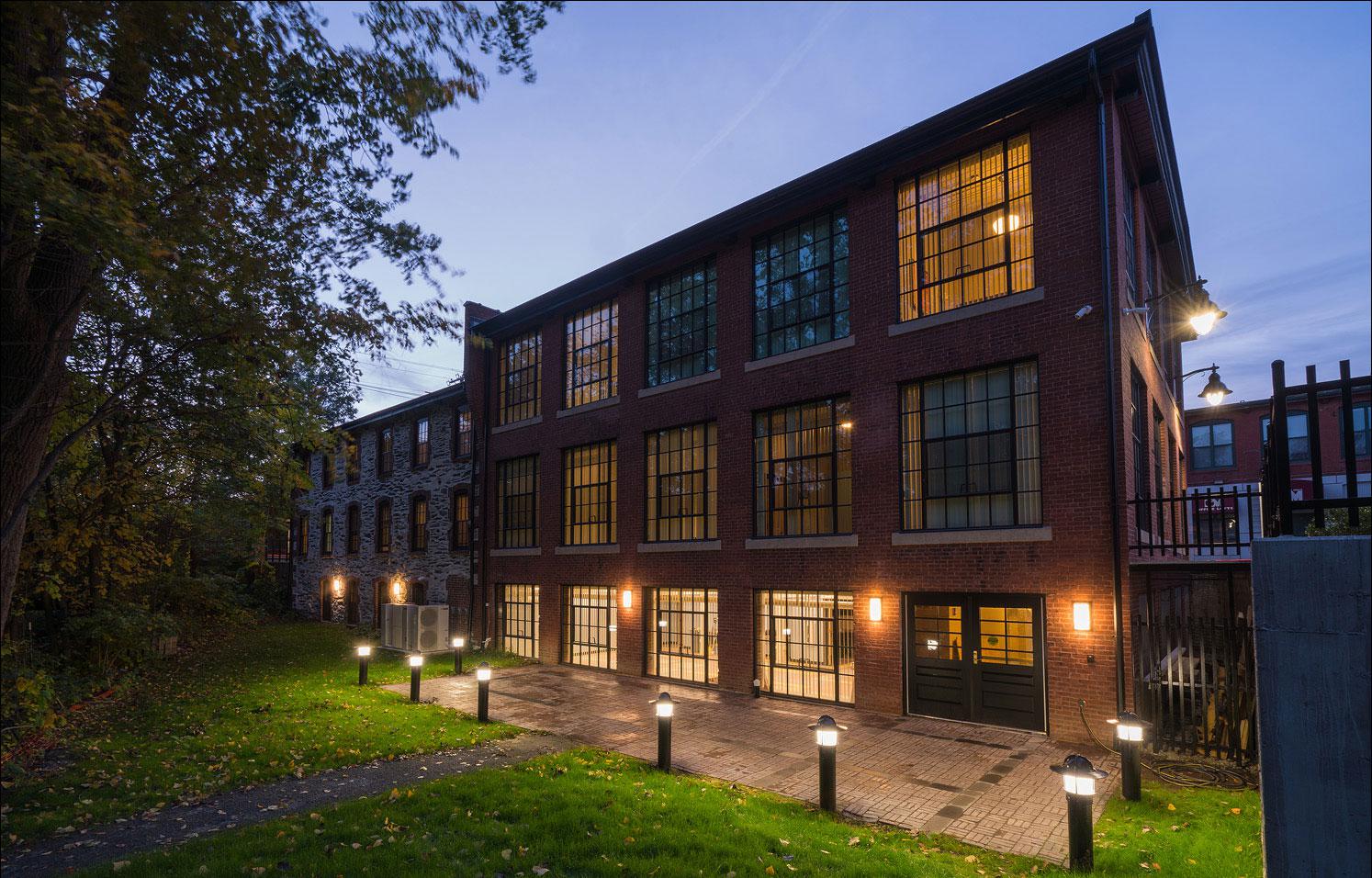